The king occupies the second place after Buddha in the Thais’ ranking of popularity and monarch’s birthday, which he celebrates on July 28th, is considered to be one of the main national holidays in

The most frequent description of Bangkok, made by tourists, who give the city endless number of characteristics after visiting it, is “of many faces.” The city has earned this epithet not only becau

The same as the Grand Royal Palace, on the grounds of which it is situated, the splendid Temple of the Emerald Buddha is the most visited place in Bangkok. This amazing construction, standing to the

The unusual park amusement Flight Experience is situated in downtown Bangkok, not far from the Skytrain station Sala Daeng. It is a flight simulator that allows feeling yourself like a pilot or navi 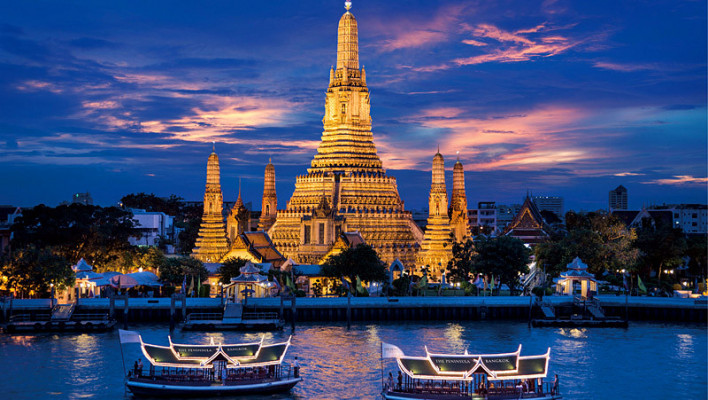 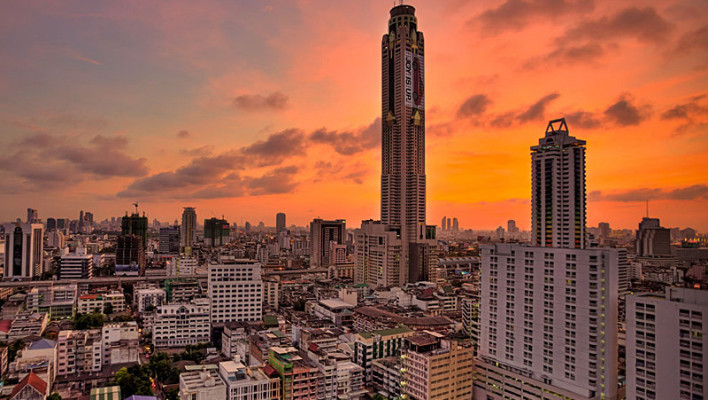 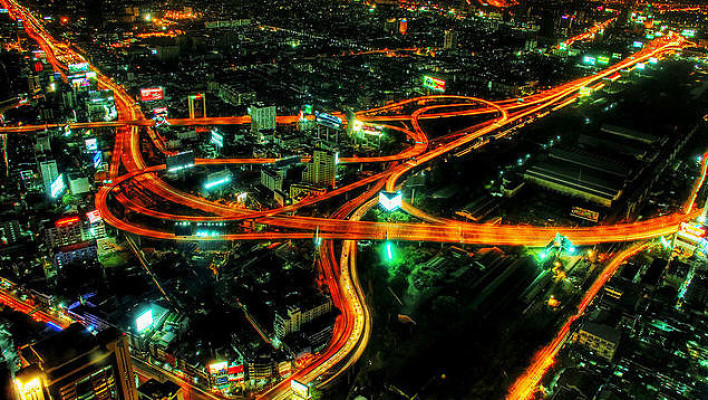 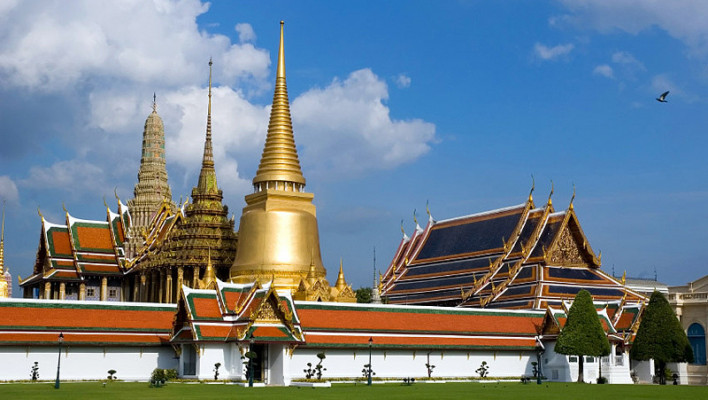 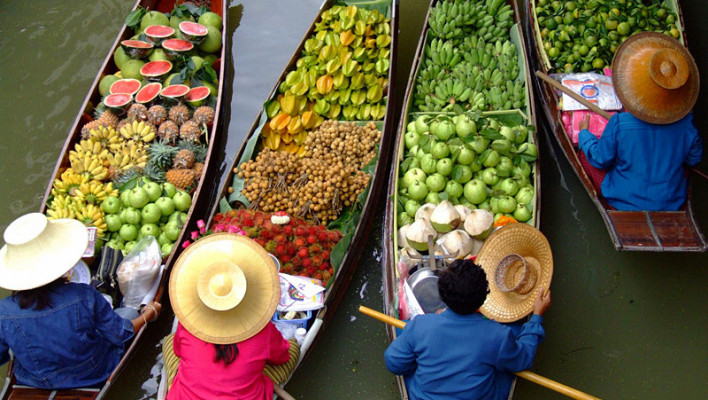 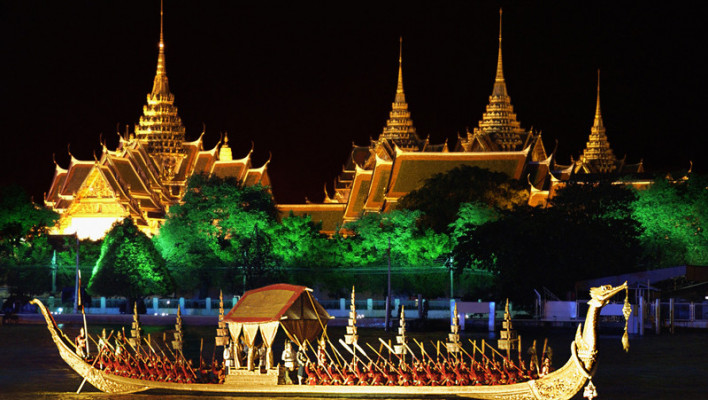 Colorful and multifaceted, Bangkok is the capital and the biggest city of Thailand; its primary economic, political, trade, cultural and religious center. In addition to this, it is the main gateway to the Sunny Kingdom. Up until recently, the country’s numerous guests perceived it merely as just a stepping stone on the way to Thailand’s heavenly islands, however those who knew their onions when traveling quickly realized that Bangkok was worthy of much more. This rapidly developing Asian metropolis knows what to show and how to surprise even the most sophisticated of wanderers. Since turning into touristic Mecca, the Thai capital is now a world leader because of its attractiveness for travelers from all over the world.

Bangkok is a city that is incredibly rich in its contrasts. In fact, the main secret of its overwhelming attractiveness is in its shocking contradictoriness. It creates a striking combination of the exotics of the orient and western modernism, combined with a desire for maintaining century-old traditions and, simultaneously, for meeting the tasks of the 21st century. Squat, dilapidated huts stand alongside shiny, luxurious high-rise buildings, modern high-speed overpasses tower above narrow streets, entrepreneurs in business suits mingle through crowds of Buddhist monks dressed in saffron yellow garments, while creaking, rattling tuk tuks stand in endless traffic jams, side by side with deluxe automobiles.

Thailand’s capital is a gigantic living organism, where everything is constantly moving, making noise, roaring and sparkling with bright colors. The only islands of peace and tranquility in this chaos are found at Bangkok’s 400 Buddhist monasteries and temples. Their strikingly beautiful buildings, with golden roofs and original mosaics, creating rainbow colors in the sunshine, are true architectural masterpieces that grant an opportunity to see city’s eclectic side.

Bangkok’s real name is Krung Thep, meaning “the city of angels.” If angels really do live in this wild mega city, then they probably settle on the roofs of skyscrapers, which tickle the vault of heaven like huge pillars. The highest of them all, the Baiyoke Sky Tower, reveals an amazing panorama of the city, with its bizarre range of buildings, fantastic interchanges, the Chao Phraya River’s twisting riverbed (which circles half of the capital like a huge arch), and numerous handmade canals. Klongs, as they are known as by the Thais, have long become one of Bangkok’s symbols. A boat trip along them is probably one of the best ways to feel city’s inimitable aura and to see how more humble Thais live.

To understand the heart of Bangkok and its residents truly beats, guests can pay a visit to the picturesque markets. They are worth visiting, if not for shopping then certainly for the unforgettable impressions and exotica: a truly special atmosphere, created by the amazing whirl of colors, shapes, sounds and scents, can be found there. In addition to this, Bangkok’s markets offer an opportunity to get to know the delightful Thai cuisine, a harmonic mixture of rice, vegetables, seafood and inconceivable spices that conjure a mind-boggling combination of remarkably different tastes.

Moreover, Bangkok provides a wide selection of entertainment, made to fit any taste. Thailand’s capital offers plenty of opportunities for recreation: authentic restaurants, original theatricalized performances and shows, an impressive variety of all sorts of bars and amusement facilities, as well as entertainment and shopping centers.

However, Bangkok’s main treasure remains its residents. Their mysterious smiles and their open and friendly nature create the inimitable atmosphere of the city, while their Buddhist calmness and unhurried manner counterbalance the hustle and bustle of the pulsating urban jungle.

Bangkok’s contrast shocks its visitors, but only for a short time. Once the busy streets have been wandered along, their tense modern rhythms felt, the thousand-year history of Thailand experienced and the amazing beauty of local temples gaped at, guests will fall in love with this illogical and paradoxical city, giving their heart to it for good. They all promise to come back, in order to feel its exceptional charm, woven (like all of Southeast Asia) from mysteries, secrets and riddles.

Siam Niramit Bangkok is a miraculous, massive extravaganza that adds variety and vitality to Thailand's entertainment profile. Enjoying a very high rate of popularity, the show is very well put together and features an exciting story about the history and culture, as well as customs and the glorious

Opened in 2012, the night market Asiatique The Riverfront is one of the newest trade and entertainment centers of Bangkok. It is situated on the Chao Phraya River’s riverside and is a huge complex that has gathered shops, restaurants and amusements for kids and adults on its premises. Right after it

Pak Khlong Talat is Bangkok’s largest flower market and one of the city’s oldest markets. It is situated almost in capital’s very center: near the Memorial Bridge, not far from the China Town. In the first place, Pak Khlong Talat is a paradise for florists, but tourists coming to Bangkok find it ver

Lumpinee Boxing Stadium is one of the most famous sports arenas not only in Bangkok, but also in the whole Thailand. In the first place, it is popular for organizing competitions in Thai boxing, or Muay Thai. Each professional boxer strives to participate in them.
Muay Thai is an ancient national ma

Soi Cowboy is a short street, situated in the Sukhumvit district not far from the metro station of the same name. During the day it almost doesn’t attract passerbys’ attention, but at night it turns into one of the most popular entertainment places in Bangkok.
The street started to develop into a po

Patpong quarter, and in particular its Soi 1 and 2, is renowned as location of one of the most well-known red-light districts in the world. Numerous tourists rush there looking for entertainment. It was one of the first recreation areas of this kind in Bangkok and it continues to excite imagination

The same as the Grand Royal Palace, on the grounds of which it is situated, the splendid Temple of the Emerald Buddha is the most visited place in Bangkok. This amazing construction, standing to the north from the royal residence, simultaneously combines two titles: the main Buddhist temple of Thail

Colorful shows of drag queens and transsexuals are one of Thailand’s touristic peculiarities. Calypso Cabaret Bangkok is the most popular and spectacular performance in the city. It is situated on the premises of the huge trade and entertainment complex Asiatique The Riverfront, which stands on the

The Sukhumvit district is remarkably popular among tourists on a par with the famous Khaosan Road. It has nothing to offer to those who like informative excursions, though. Major architectural and historical attractions of Bangkok are situated in other part of the city. But on the other hand, those